Broxton Bridge Plantation and USA South East Endurance were pleased to host the the 2019 USEF NATIONAL ENDURANCE CHAMPIONSHIPS AND THE NORTH AMERICAN ENDURANCE TEAM CHAMPIONSHIPS 14-16 November in the Low Country of South Carolina.   Grace Ramsey and the wonderful team of FEI officials and volunteers made it possible to provide a fun and learning environment for athletes, in spite of very challenging weather!

For the 1* championships, the trails were in GREAT shape due to the continued improvements by the plantation owner, Jerry Varn and his staff.

Ehrhardt, S.C. – The Broxton Bridge Plantation in Ehrhardt, S.C., played host to the inaugural USEF Endurance National Championships on November 14-16 as part of the 2019 North American Endurance Championships. In addition, an unofficial FEI team competition was integrated into the competition at the CEI2*/CEIYJ2* and CEI1*/CEIYJ1* levels to strengthen team development skills.

Taking a five-loop tour equating to a ride of 120.7 kilometers around Broxton Bridge Plantation, competitors in the two-star divisions made light work of the course. In the USEF CEI2* Endurance National Championship, Marcia Weilbach (Brooks, Ga.) and Zanthus Fury took home top honors. Weilbach and her 14-year-old Arabian gelding finished the ride in a time of 06:45:25 with an average speed of 17.8 kilometers per hour.

“It is such an honor to win a national championship title, especially when you know that everyone participating is every bit as eager as you to bring that title home,”Weilbach said. “It is humbling to realize that it is only through God’s grace that we are able to physically do what we need to do to achieve such honor. What we ask and receive physically and mentally from our horses is truly so amazing; they are the stars, not us.” 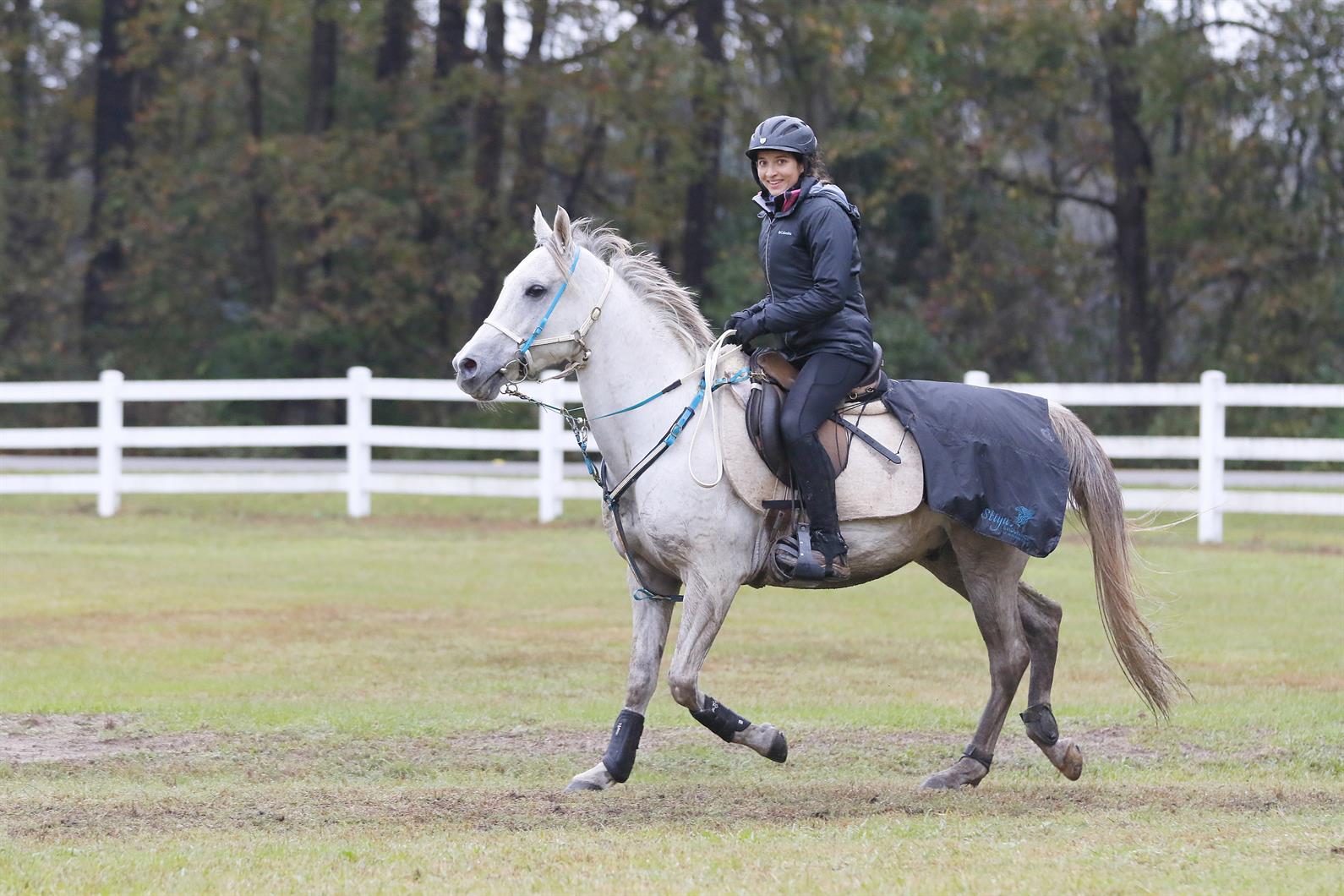 In the USEF CEIYJ2* Endurance National Championship, Reine Pagliaro (Swannanoa, N.C.) and Beautiful Knightmare were crowned the national champions. As the rainy weather continued leading up to the start of the CEIYJ2* ride, Pagliaro adjusted her plans after consulting with her trainers and mentors to take a slower pace with Mary Kathryn Clark and Kathryn Clark’s nine-year-old Arabian gelding. The pair finished in a time of 13:44:56 with an average speed of 8.8 kilometers per hour.

“We started with a mindset of taking the time that we needed to get our horses though the whole ride safe, sound, happy, and healthy. At the end of the ride, I was thrilled that we had changed our objectives for that day and focused on a strong completion,” Pagliaro explained. “When I was first presented with the national championship title, I was truly shocked and hit with so many emotions. I felt excitement, accomplishment, and gratitude for everyone who had helped ‘Beau’ and me along the way.” 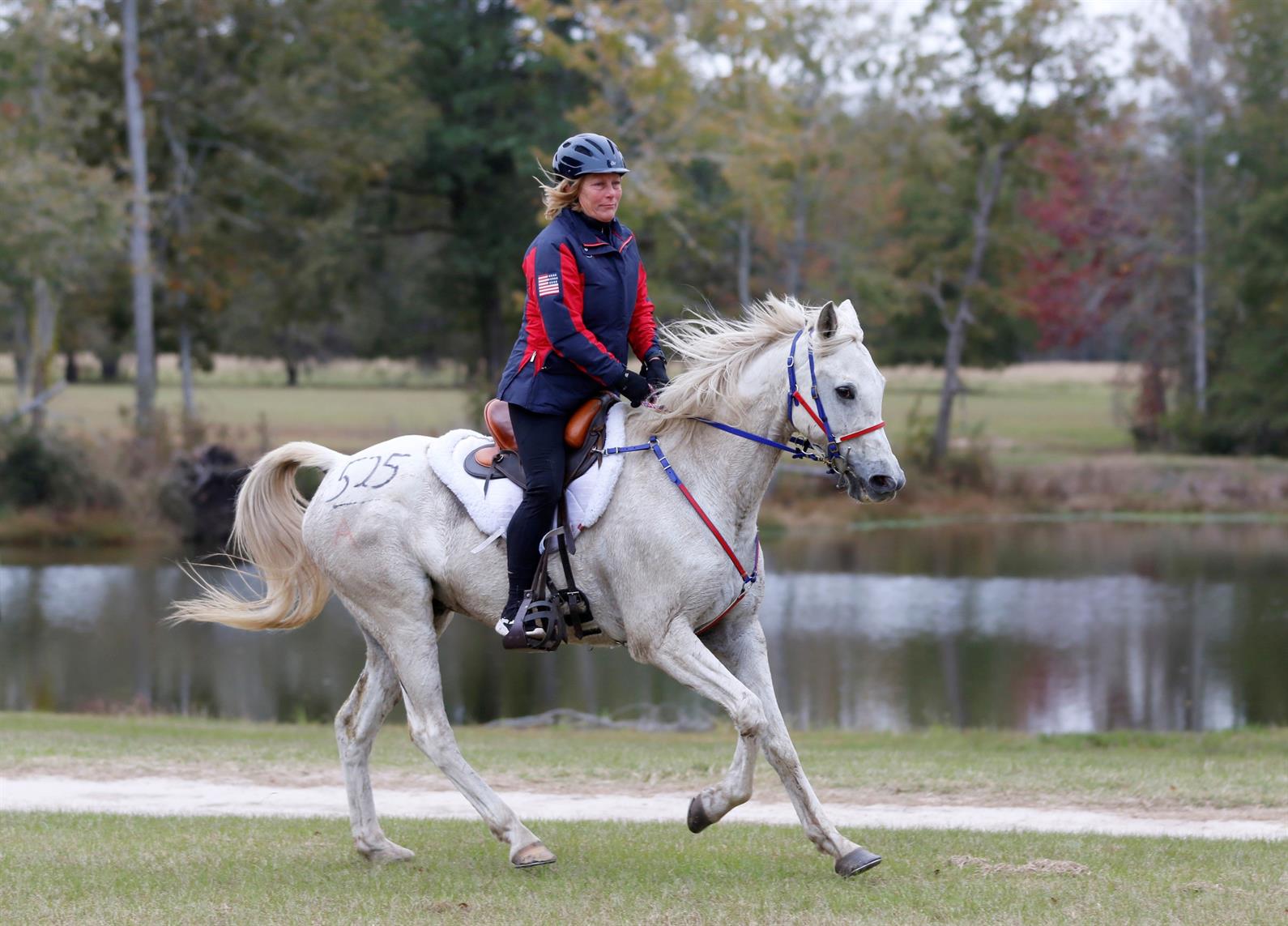 Riding in the one-star divisions with a course composed of three loops for a total of 80.6 kilometers, Cheryl Van Deusen (New Smyrna Beach, Fla.) won the USEF CEI1* Endurance National Championship aboard her longtime partner, Hoover the Mover. Van Deusen and her 15-year-old Arabian gelding finished the ride in a time of 04:50:01 with an average speed of 16.7 kilometers per hour.

“The Broxton Bridge Plantation is a wonderful venue. The trail system is established, and the volunteers were absolutely wonderful. Hats off to Grace Ramsey for managing a great ride and to the USEF for their support,” Van Deusen said of the competition.

The inaugural title was a meaningful one for Van Deusen because she was able to partner with her homebred Hoover the Mover, who has found much success. The pair has topped the FEI Endurance Open Combination World Rankings in the past, and “Hoover” has close to 6,000 competitive miles to his record.

“To be champion in the CEI1* at Broxton and the recipient of the Best Conditioned Horse award by the veterinary team was wonderful,” Van Deusen said. 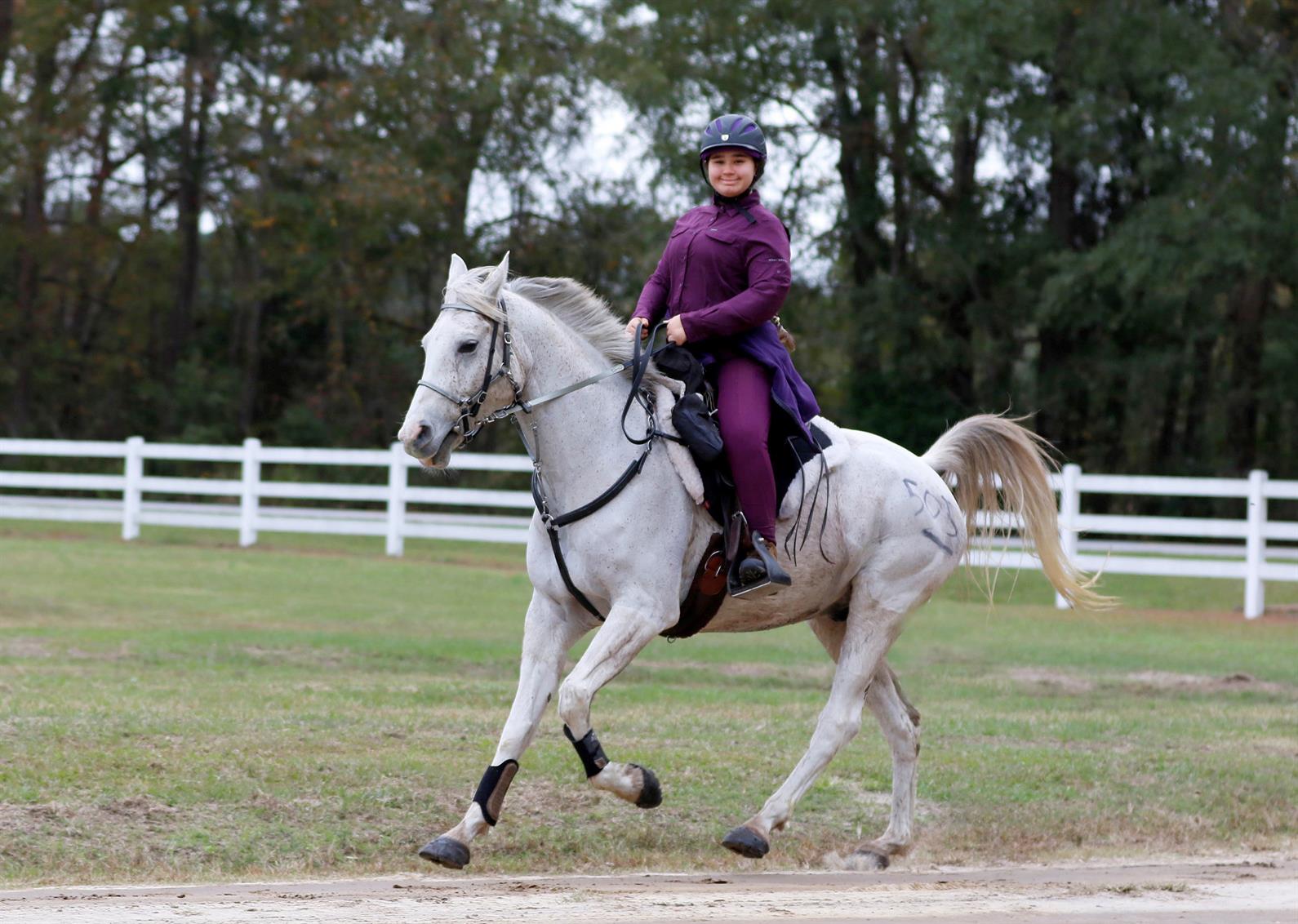 Sophia Carpentier (Pomfret, Md.) and Perseveranze brought home the title of USEF CEIYJ1* Endurance National Champion. Carpentier, who began competing in endurance rides last year, finished the ride with Melody Blittersdorf’s nine-year-old Arabian gelding in a time of 07:13:25 with an average speed of 11.1 kilometers per hour.

“The ride went really well. Our goal going in was for me and Perseveranze (‘Perci’) to finish, which we did,” said Carpentier. “I was happy that we achieved that. The title is unexpected and exciting. And this achievement does not just belong to me; many people and horses helped me get here.”

The team competition operated in a similar format to that of FEI Nations Cups™. Only the top three scores from each team counted towards the team classification. At the end of the competition, the U.S. Southeast Team won the CEI1* gold medal. The team consisted of Van Deusen and Hoover the Mover; Rae Shumate-Tysor (Shelbyville, Tenn.) and Kount Czester SWA, Misty McAdams’s eight-year-old  Arabian gelding; Thomas Rajala (Hillsborough, N.C.) and Hheartbreaker, his eight-year-old Arabian mare; and Shawn Polke (Lake Mary, Fla.) and WMA Riversong, Mary Kathryn Clark and Kathryn Clark’s eight-year-old Arabian mare.

The FEI recognized the overall order of finish with the top 12 combinations in each senior and young rider division receiving individual awards.

The USEF International High Performance Programs are generously supported by the USET Foundation, USOPC, and USEF sponsors and members.

One 5-rider team for the CEI 1*, a 4-rider team for the CEI 2* and one Young Rider in one of the 25mi CEN AERC rides. In past editions and other WEC, and WEG events Mexico had presented a maximum of 3 riders but failed to ever finish as a team to score, so they took the opportunity to vindicate themselves and show the team strength.
On Thursday 14 November, riders José L Flores, Mercedes Acuña, Camila Gutiérrez, Carolina Galán, and Enrique Partida along with chef d’équipe Ricardo Galán started their CEI 1* 80km ride at Broxton Bridge Plantation with a clear objective: to finish at least three riders as a team preferably all five without risking any horse for a better individual position.

The ride started 7am under cold conditions but no rain yet at the venue. The team rode together as a pack from the beginning and it wasn’t until gate 3 that they lost 2 of their horses due to slight lameness most likely as a result of the cold conditions. “It was important to ride as a pack as we knew our horse’s strength was based on their reliability to finish, not that so much on speed. I asked the team to hold a steady pace and keep together most of the entire ride as we had lost two mounts it was of the upmost importance to be cautious.” Said Ricardo Galán, chef d’équipe. The three remaining riders started the last loop together and were asked to only consider a split in this last loop if one of the horses was showing superior stamina. So, they did, José Flores and Enrique Partida picked up the pace and finished with times: 6:10:09 and 6:10:17 respectively. Only 18 minutes later came in the third rider, Mercedes Acuña at 6:28:50 who gave the Mexican team that third completion to score this historic silver medal. For Carolina Galan, one of the young riders on the team this was a great accomplishment. “This ride was an amazing adventure. Being able to practice endurance in a place as peaceful and beautiful as Broxton has been an unforgettable experience to me.”

On Friday morning weather wasn’t so benevolent and Emilio Flores started his participation as a Young Rider in the 25mi CEN AERC under cold and consistent rain. Riding “CA Good to go” he was able to score a completion and a total time of 3:46:04 was enough for him to be the first Young Rider in, eight overall and High Vet Score. “I was very happy to participate in my first AERC ride, my horse PJ was amazing and riding along Penny Staffney and my father was a thrill. Can’t wait to come back again.” Said Emilio.

The turn was up for the CEI 2* 120km Mexican Team who was received by harsher weather conditions on Saturday. The trail was a concern for some of the ride vets and the start was delayed with a threat of cancellation due to the heavy rain that hit Broxton the last 30 hours or so. “I had ridden the day before and saw that the conditions were not as bad as it could be but understood the concern about possible injuries. In the end I was very happy to learn the ride was a go, we had come all this way to participate and were definitely ready and fired up.” Said Jose Flores. After consideration the ride started at 7:30am and Mexican Riders Ricardo Galán, Amador Lobato, Enrique Partida and Adriana Gámez began their adventure. José Flores acting as Chef d’équipe made it clear that the plan was to follow the same successful strategy from the CEI 1* 80km ride, ride together as a pack at the pace of the weakest link and not until the last loop the possibility of sending out the strongest horse would be assessed. For three loops the team rode together successfully, and it wasn’t until the third Gate that a gait irregularity had Adriana Gámez’s horse out of competition and left the remaining three riders with the responsibility of completing all to score as a team.

Amador Lobato’s horse “Indian Reinman” was definitely at the top of its game and the team decided he could ride forward at a faster pace to gain some time. This way Amador and Indian Reinman arrived at the finish line in 5th overall place as first international rider with a total time of 09:37:54 just ahead of Cheryl Van Deusen from team USA. A few minutes later in the dark, cold and under the rain Ricardo Galán and Rafael Contreras successfully crossed the finish line with a total time of 10:01:25 and 10:01:30 respectively. All three horses passed their vet check to ensure a silver medal for the team, just waiting for the last remaining USA rider on the trail to define the final placings. A bit over an hour later Thomas Rajala riding “Full of Fiesta” failed to qualify the last inspection giving Team Mexico this coveted and historic first Gold Medal at an international team competition.
“This was a historic milestone for Endurance Mexico, not only it has been our largest participation in an international team competition but having both of our teams complete their rides which resulted in winning two medals. We are incredibly grateful to the organizing committee and both teams USA and Canada, it has been a n honor to ride with them and we can’t wait to come back.” Said Ricardo Galán, president of Endurance Mexico.